This is about drawings made long ago, in Palestine, how they came about, and what happened to them.

During the Iran-Iraq war I read about child soldiers. Having drawn mostly babies and children in crisis– in hospitals, at *trials – I wanted to draw these child soldiers, but the risks seemed unsurmountable. Then came the Palestinian Intifada (Uprising), the first, nonviolent protest against Israeli occupation. With the advice of various organizations – Israeli human rights groups, refugee friends – and a then perfectly acceptable political party in Denmark called the PLO, I prepared for my first trip in 1987. I had no funding or sponsorship. I was on my own. My plan was to draw the children involved in the Intifada, to make 300 drawings in 6 weeks.

At the time I was ignorant and wished to remain so. “I am not political” I boasted. I booked into a small hotel on the Mount of Olives and started off at Maqassad Charitable Arab Hospital, down across the valley in East Jerusalem. Working just as I did in Denmark, getting permission – after a year studying Arabic at Copenhagen University, I could manage a few phrases like “May I be permitted to draw your child?” and “Please write what happened to you,” and “I will give you a photocopy” – all in classical Arabic which must have sounded like Shakespearean English to them.

The welcome was huge, also from staff, the response almost overwhelming. There were many wounded children to draw, and ask for their names and stories be written on the drawings.

At sundown I walked back up the dusty hill – no wall then, no check points – and prepared to go to bed. All I could do was relive the awfulness of what I faced. I was overcome with emotion and could not sleep.

I had a severe talk with myself: you are here to work. I slept then, and the next day and from then on was able to draw.

Before I went to Palestine, I had read the mainline press and thought that children were forced into some kind of “line of fire” when they confronted the soldiers. I expected to meet children who were all alike – denied their childhood – small, faceless soldiers. Instead, I met human beings who had made choices and answered circumstances with the energy, conviction and courage that childhood shares with any age.

I learned that there was no front line, that the children were attacked in schools, in hospitals, in their own homes, and staff and parents were unable to protect them. About a third of the injured were involved in clashes (stone throwing). I drew in the West Bank, accompanying nurses on their rounds, and in Gaza, going by taxi or ambulance, which was possible then, and staying in people’s homes. Virtually no journalists or photographers were covering that uprising. And I was under the radar – your little tourist lady drawing in the Holy Land. Nor did I consider myself a “real” journalist: when there were gunshots I ran the other way. The drawings were brought secretly out of Israel in a diplomatic pouch and I fetched them later in Geneva. 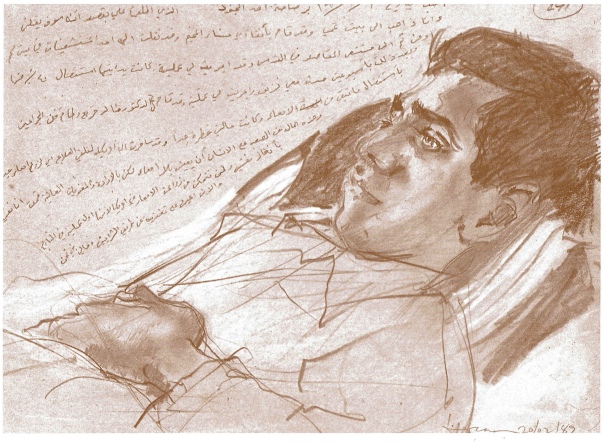 I prepared an exhibition and showed it at the UN in New York. They have been exhibited, among other places, at the UN in Geneva, UN Plaza in New York, in Washington, D.C., Oxford, Cambridge and London. I toured the US and Canada for 9 months with 150 of my drawings as slides. These later became the film *Drawn from the Fire.

In 1990 I returned to Palestine. My plan was to complete a second 6-week project, this time drawing the soldiers and with their own handwriting. Because the young soldiers, all conscripted out of high school, looked heartbreakingly like my children: I married a Jew and have 3 sons. One of my *poems begins “Any one of you /could have been my son.” But the day after I arrived I witnessed the Temple Mount Massacre and my purpose changed.

I could see the golden dome of Al Aqsa Mosque from the Mount of Olives, hear across the valley the loudspeaker blaring and the shots and see the people running about in the compound: they looked like ants from so far away. I was at the hospital when the dead were brought in. I watched the shouting and mourning. I sketched from a window above the courtyard, too scared to find my way down to the morgue and no one with time to protect me. No autopsies were performed. They were buried swiftly. Many had been shot in the back. I feel guilt and remorse to this day.

I found my way down to the basement corridors and drew among the wounded. Sometimes I had to help – hold an IV – or get out of the way.

Now so many years later, this is happening again in Gaza’s hospitals, even as I write.

I published B’Tselems immediate verbatim-translations of the loudspeaker voices taken from an amateur video, as they begged the school children and young people in the open compound to hide – but the Israeli press was quicker and spread the news that it was incitement.

I drew the wounded, and returned to Denmark with 300 more drawings, some of which became part of the first exhibition.

Now with expert help I am submitting the exhibition to the UNCopenhagen, and possibilities for future shows, and the eventual showing and archiving the work into a museum. The catalogues, which are little picture books with the children’s words in Arabic translated into English and French, will be donated to school libraries – another project.

These faces, these lives, these stories and all the others since, are part of a greater story.

*Required Reading, a witness in words and drawings to the Reena Virk trials,

Heather Spears’ 55-min. video DRAWN FROM THE FIRE on youtube with over 100 drawings and the childrens’ stories: https://www.youtube.com/watch?v=n5MIVv7n-OE 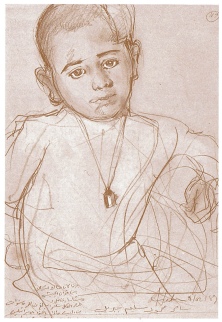