The Danes have a new way of entertaining their employees at get-togethers.
Today I am off to teach 40-45 people to draw the nude model in 1½ hours. They are staff at a discotheque and this is their annual Christmas party. It is to be a surprise – they have not been told what the “event” will be. The first time I called the boss, who is arranging it, he was hung over and wanted to put off the call, but I did nail him down the second time. He has agreed reluctantly to go along with my drawing exercise. I told him I could not teach people to draw a nude model in 1½ hours, any other way. He says there must be 2 models.

So we are going to do Round Drawings, going from one to the next and gradually developing the one pose from all angles, returning to our own drawing at the end to put in details. I’ll show them copies of drawings made this way in adult life drawing classes, where I have taught this exercise successfully many times.

As we are so many, we’ll need to form 2 circles. The boss said no, it is on an old stage and it has to be a horseshoe in front of the bar, with people at tables. We ended up agreeing on the horseshoe. The models will hold the same pose but it will be seen – and drawn – from every direction.
I have to persuade them to draw very little – just a short vertical mark – in the core of a tense, standing pose where the arms are away from the torso. I’ll will give them stumps of coloured chalk-pastel. After the first 5 drawings (they will move to the right) I‘ll let them extend their marks – into the head, through hips and thigh, shoulder and upper arm. Always extending from the core.
I will draw too, show them everything.
The other time I did this – a similar event with 35 actors – I gave them too many dark chalks and the drawings got overloaded and heavy. But it worked well. Today, with over 40 drawing, I have chosen light, bright colours. 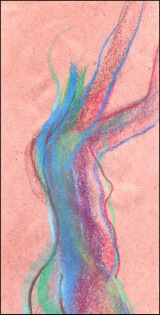 It may be a terrible failure.
My son, also an art teacher, says “If they won’t listen to you, just leave.”

Maybe it should be like Musical Chairs and anyone who won’t comply (which usually means, draws too much) has to leave the game.
Why did the boss insist on 2 models? It may not matter. Now the female model tells me on the phone that she can’t lift her arms and is bringing a broomstick to lean on.

It was a disaster – but everyone was happy so I was the only one who suffered. Got up there by train in the windy cold to a little street in Elsinore with the 2 sweet models and the stuff, and it was all dark and we could not get in. Finally the proprietor heard us and opened a gate and took us up a metal outside stair – it was indeed a discothèque – the one they all work at – and it just was dark, and pounding with music and happy shouts and laughter. There were my “students” all 43 of them, sitting around tables having eaten and still drinking steadily. Both the boss and my models tried to persuade me not to bother trying to teach them but I was stubborn and still hopeful. The boss would not have the tables cleared, as people would need their drinks, though he agreed to turn up the lights a bit and even turn down the background pounding. He had told me there was plenty of light, but “plenty” in a discothèque means just enough to navigate. Everyone was tanked and gleeful, rising off and on to ‘skål’ and shout. I laid out the materials and waited to be introduced but the boss explained that he had done so (it was impossible to hear him) and just to go ahead.

The uproar was continuous. I did manage a few instructions before I realized it was not going to work. The models were cool, standing in a narrow space between the tables, and the kids respected them, anyway. Me they scarcely noticed past goodnaturedly putting up with my presence. Towards the end, half the people were wandering around and no one noticed the prize drawing I chose. Everyone was sweet tempered. They enjoyed marking up the painstakingly prepared blue paper with the bright coloured chalks.

I am mad at myself that I forgot to photograph at the end. Afterwards as I was trying to find my bits of coloured chalk and stack the boards, some soaked with spilled wine, what lights there were went off and the music and strobes went on and I just wanted to get out. On the train back we three talked about various disasters in our trades of teaching and modelling. 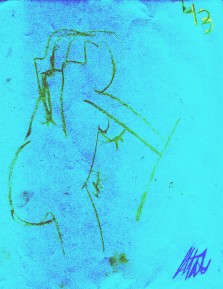 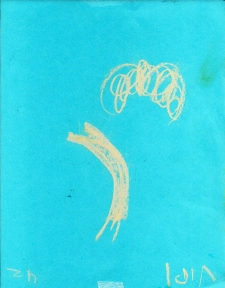 The next morning, Looking back at my pretentious plans and instructions, I can only sigh.  Two drawings that came back with me by mistake show the separation into objects that is the brain’s pleasure. In the first, one can see a very good attempt at the “core”, but the curls on the model’s head came next – to the brain they were important- so they were added to the drawing, away off on their own.

The line drawing shows how the brain wants us to draw well-known objects – arm, leg, head, torso with its sub-objects, breast and bum – on their own, and even includes the broomstick, and they are joined together by the contour. It is really a good likeness of the chunky model. 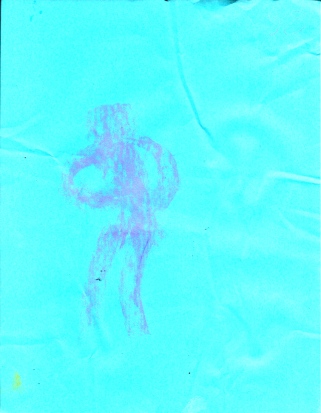 The third drawing certainly moves through the legs up into the torso in a beautifully accurate way, though the looped arms. like 2 handles on a jug, have been seen for themselves.

If only I had collected them all! These drawings also have the enormous plus of being “thrown off” just for fun, without shyness or ambition.

PS for serious information about this exercise, and how to draw the whole, flowing body without being snagged and sabotaged by known, named, salient objects, read The Creative Eye, chapter 7.